Nushell And Its Place In Your Toolbelt

Nushell is something I found recently, and have come to appreciate. Here’s, briefly, why I think it deserves a place in your toolbelt, even if it may not become your login/default shell of choice.

Object streams instead of text streams

The big conceit of nu is that it adopts PowerShell-like structured object flows in pipelines, instead of relying on unix-style conventionally-formatted text streams. Since none of the shell-stalwarts like the GNU coreutils support these, they also wrote a fitting set of commands to execute on this paradigm. And what a success this is.

To be explicit, this is the one point why I think you should have nu installed even if you use another shell for your daily work.

To showcase this feature a bit, for work reasons I had to delve into log-files and check of sometimes, user IDs were unset, since it propagated all the way into some reports and we were asked about. Now, I could write a script for this, I grep the logs after crafting an expression that would fit null user IDs, I could check by hand. Or I could fire up nu and run this:

And there were my unset null values, 52 of them.

Now, I could do this with jq, which is a wonderful tool that should not go without mention, solving this problem precisely. But it solves it for JSON, while the above pipeline would also work if my files were in YAML (yes there’s yq, but the syntax is different from jq, which is maddening), TOML, XML, CSV or anything reasonably popular that can be made to fit a table structure.

That’s why I think it deserves at least a place in your toolbelt, because it takes those tools and integrates them into a scriptable and generalised language, rather than having to implement that entirely inside jq. Which leads to…

If you’re like me and you detest using bash for scripts because of its myriad issues and footguns, you’ll often find yourself writing verbose one-off scripts in something like Python to avoid them. This is always annoying, because what could be a few lines in bash is inevitably more in Python.

Nushell solves this problem very well for me, because they provide a level of abstraction in between: A typed(!) bash-like scripting language with sensible syntax, and Rust-like errors(!!). For those that have never seen this style of error before, here’s what a type error looks like in nu: 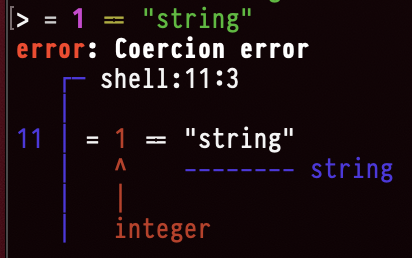 Functions can take typed arguments. Functions have helptext. Pipelines tell you where a type error originated. There’s a lot to love about nu’s scripting capabilities, and it occupies a really nice spot where digging out Python is just annoying and bash remains full of footguns you don’t want to think about.

However, for cooperation with team members, servers, and so on you will still be stuck with python/bash since it’s unlikely that people even know of nu, much less have it installed. But for those cases, this article might help :)

It’s very clear that the authors of nushell care about the user experience and thus have done what they can to make it a welcoming, and so a lot of small features are included solely oriented towards the user experience, even more so than fish.

My favorite little thing is that invalid subcommands flash red. That means, that rather than type a command and hope the flag is the one you remembered, you can type and if the subcommand/flag/argument is not known to nu, it will be highlighted in red.1

There’s another nifty little thing that’s an improvement on pushd/popd, the concept of “shells” (which, to me, is a bit of a terrible name). They have a wonderful explanation here, to which I will just link.

The documentation is pretty great in general, the parts of it that are there. A lot better than you would expect from an early-stage project, and I like it a lot. They also have a cookbook for common uses, which displays some of the cool stuff nu can do.

A word of caution

Nushell is still early days. A lot of things are janky. It is however a very active project, and if you’ve been looking for a project to contribute to, everyone seems to be friendly and welcoming. This, however, means that things will break, change, and otherwise inconvenience you. In my experience it’s been pretty stable and good, but it is easy to tell that a lot of edges still need to be smoothed.

All in all, I’m happy to have found it, and it makes a nice addition to my toolset. Perhaps you should consider that as well.